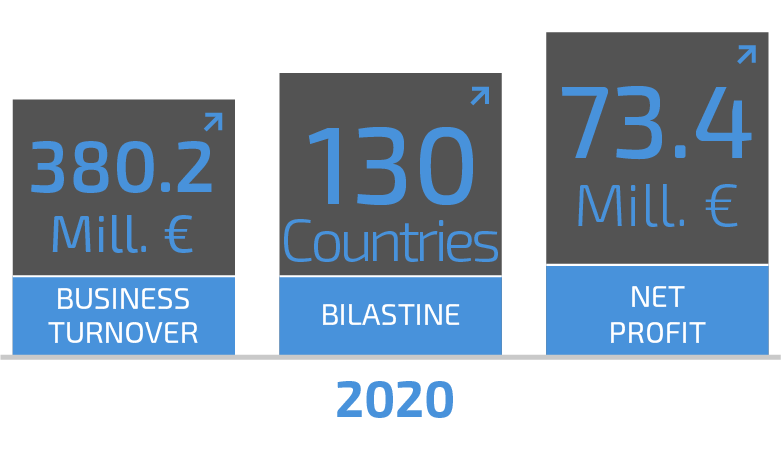 Faes Farma, a national pharmaceutical company founded in 1933, has a solid presence in Spain and Portugal, with a broad and growing international development, with presence in numerous countries and exporting raw materials and finished pharmaceutical products to a growing number of nations.

For the development of research, production and marketing of pharmaceutical products, Faes Farma has a workforce of more than1680 people (by March 31, 2021), at its headquarters in Lejona (Vizcaya), offices in Madrid, Vitoria Laboratories in Portugal, Diafarm Laboratories in Barcelona, and its subsidiaries in Italy, Mexico, Colombia, Peru, Chile, Ecuador, Nigeria and the recent incorporation of Guatemala, after the acquisition of the company Global Farma, SA In addition, Faes Farma includes its animal nutrition and health companies (FARM Faes) such as Ingaso Farm and Tecnovit.

One of the the biggest results of the pharmaceutical research activity of Faes Farma is the launch of our antihistamine molecule bilastine, marketed in Spain since 2011 and licensed in more than 130 countries throughout the world.

Faes Farma Group ended 2020 with a turnover of 380.24 million euros, which represents an improvement of 6.4% compared to 2019. This positive evolution reaffirms the trend of previous years.

Also noteworthy is the positive evolution of the heading “Other Operating Income”, increasing by 21.2% compared to 2019, thanks to the performance of the licenses granted, both for bilastine and other molecules.

Faes Farma Group has ended 2020 with a Consolidated Net Profit of 73.4 million euros, an increase of 14.6% compared to 2019, obtaining, for the sixth consecutive year, the highest profit in its history; especially relevant in an environment as complicated as the one posed by the pandemic situation caused by Covid-19.

We use cookies to provide you with the best experience on our website. Click here for more information. You can accept all cookies by pressing the "ACCEPT" button or you can obtain more information about the cookies we are using, configure them or reject their use by clicking on preferences.

This website uses cookies so that we can provide you with the best user experience possible. Cookie information is stored in your browser and performs functions such as recognising you when you return to our website and helping our team to understand which sections of the website you find most interesting and useful.

Strictly Necessary Cookie should be enabled at all times so that we can save your preferences for cookie settings.

If you deactivate this cookie we will not be able to save your preferences. This means that every time you visit this website you will have to activate or deactivate cookies again.

This website uses Google Analytics to collect anonymous information such as the number of visitors to the site, and the most popular pages.

Please, first activate the strictly necessary cookies so that we can save your preferences!