Faes Farma > …Such as drying the product in special ovens.

…Such as drying the product in special ovens. 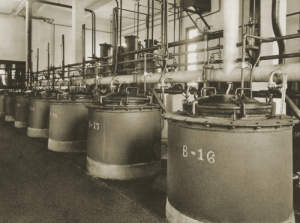 ...Such as drying the product in special ovens.

“As a result of the war, with patents and manufacturing privileges abolished, the French chemical industry, driven by the double incentive of necessity and competition, launched numerous substitutes for Salvarsan and Neosalvarsan. They were simple chemical type variants of arsenic benzene. They were distributed under the names of Sulfarsenol, Rodarsan, Treparsenan and their corresponding Neosulfarsenol, Neorodarsan, Neotreparsenan, etc., while the English were creating Arsphenamine and Neoarsphenamine.

During the war, too often in France and sometimes in Germany, due to rushed, defective production, the sorrowful black series of arsenic preparations made their appearance. They were so-called due to the many serious accidents they caused. For this reason, and for others that cannot be so easily confessed, the black legend was intensified, fuelled by the abundant publications about tragic and even mortal neosalvarsan accidents.

It was also during the European war when our attendance for many months at a dermo-venereological Clinic known worldwide allowed us to learn something about methods and techniques that, until then, were unknown or hardly known in Spain”.

We use cookies to provide you with the best experience on our website. Click here for more information. You can accept all cookies by pressing the "ACCEPT" button or you can obtain more information about the cookies we are using, configure them or reject their use by clicking on preferences.

This website uses cookies so that we can provide you with the best user experience possible. Cookie information is stored in your browser and performs functions such as recognising you when you return to our website and helping our team to understand which sections of the website you find most interesting and useful.

Strictly Necessary Cookie should be enabled at all times so that we can save your preferences for cookie settings.

If you deactivate this cookie we will not be able to save your preferences. This means that every time you visit this website you will have to activate or deactivate cookies again.

This website uses Google Analytics to collect anonymous information such as the number of visitors to the site, and the most popular pages.

Please, first activate the strictly necessary cookies so that we can save your preferences!